Joey Wilson has wowed us once again with his woodworking and littleBits mastery, and this time he’s also tugged at our heartstrings with his newest project, The Voice Box.  Uploaded to coincide with the anniversary of his Dad’s death, The Voice Box was conceived for an audience of one: Joey, himself. 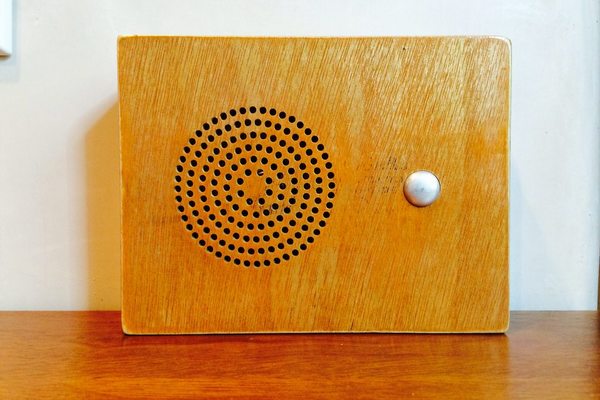 He shares the full inspiration story on his blog post, also titled “The Voice Box“.  Here’s a snippet of his writing:

“Losing the voicemails from my father was the catalyst for creating the Voice Box. I imagined a beautiful little wooden box that would sit on the mantle, with a single button that, when pushed, would recount a joke or a story in my father’s voice. I spent a few days going through my father’s speeches once more, pulling out the jokes and stories that made me smile and with a handful of LittleBits at the ready, I went to work. In the end I had captured 42 of these jokes and stories in a little wooden box.”

He also shares on his blog three selections of his Dad’s stories, one of which is dubbed “The Driveway”:

Hearing samples of his Dad makes us want to set aside coffee time and ask Joey all about how he made it while we listen to more stories.  Fortunately, he drills down and shares his entire build process on his project page: The Voice Box.  In this video, he fills us in on how he positioned those speaker holes so perfectly and how he used magnets in his box construction in a very littleBits fashion.

The circuit uses a button, pulse, and of course the mp3 player.  When you hold down the button, the circuit pulses through tracks on the mp3 player, which gives the sense of a random shuffle feature. 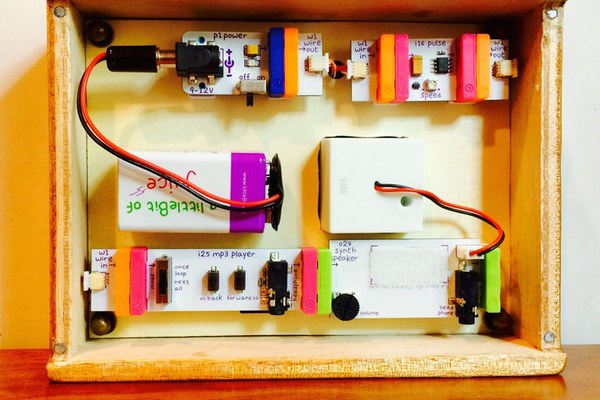 Joey Wilson is a regular visitor to the forums, and there’s a good chance you’ll see him on our next Community Call.  We’re hoping he’ll share more of his Dad’s stories with us.