With littleBits logic modules, you can program in block form. The logic modules create rules for your circuit to follow, giving you more ability to create interesting and complex interactions. With the launch of three new logic modules (NAND, NOR, and XOR) in addition to the double AND, double OR, latch, and inverter, we have rounded out our logic collection. In this post, we are excited to share new projects and lessons that cover all things logic! New to logic, fear not! Once you learn a few basic rules, a whole new world of circuits opens up. Learn how to make a Jeopardy-style lockout buzzer, an electronic combination lock, a 21st century fortune-telling device, and more!

For a full introductory lesson about logic, check out our lessons page, or download this PDF.

Taking the fast track or want to skip to a specific module? Check out the links below:

The double AND module is a good option for projects in which you want two actions to trigger another. Projects that use the double AND module:

• • • Smart Paper Towel Dispenser: hack a paper towel dispenser to feed you a towel as you finish washing your hands.

• Great Uncle Edward: create a creepy interactive portrait with eyes that follow you around the room.

The double OR module is a good option for projects where you want to detect two inputs but don’t care which input is activated. 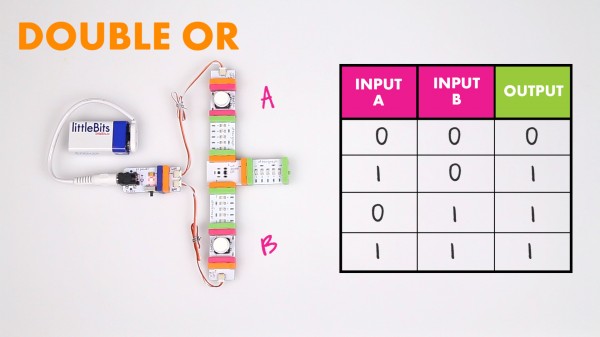 Projects that use the double OR module:

• Magic 8 Machine: a 21st century fortune telling device based on luck and logic.

The NAND works well in projects that need an output to go OFF when both inputs are triggered.

Projects that use the NAND module:

• Lockout Buzzer: a gameshow style buzzer that locks out the other player.

The NOR gate is good for projects in which you want the output to be ON unless one or both of its inputs are triggered. 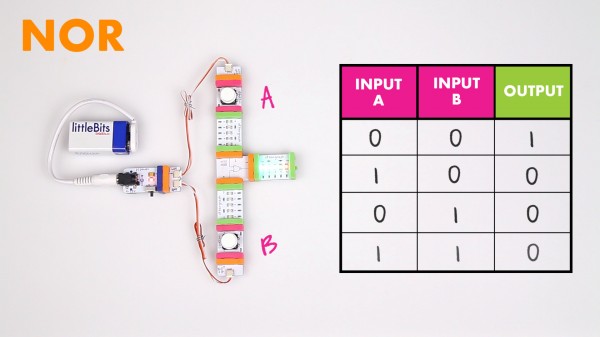 Projects that use the NOR module:

The XOR is great for projects in which the activation requires input alternation. Projects that use the XOR module: