I am based in New York City. I grew up on the East coast of the US, and I think this part of the world will always feel like home for me. We are looking for a new studio location, though, so we’ll see where we set up shop next… My maker superpower is electronics design. Before I started Caselden Studios I worked for bigger companies as a design engineer, so my role was basically to take raw concepts of new products, and then build out electronics in to a working prototype. That means circuit design, writing code, etc etc.

But my heart has always been in music, too. I’ve been making electronic music for many years. Over time I noticed a pattern: every time that I want to compose a new song, I usually end up designing new instruments or software to control the sounds. That would range from writing code for new plug-ins, to actually building new synthesizers. I also like to hack toys and see what kind of crazy new sounds and behavior I can get out of them.

So these days I’m focusing on fusing these two elements together, and bringing the experience out to the public in the form of sound sculptures. The idea is that instead of just using custom instruments myself to make music, I design them in a way where other people can play around to make sound themselves.

Recently the interactive sound sculpture concept seems to be most popular, and that’s what we’re focusing most of our resources on. But I also have a bunch of behind-the-scenes sound experiments going on at our studio like music for yoga, music for games, etc.

I am inspired by the emotional impact that music and sound can have on people. It still amazes me how much my day will swing upwards when I’m listening to music in my workspace and the right song comes on (or vice versa 😉

As far as inspiration from other artists, Brian Eno‘s concept of ambient music had a pretty big impact on me. He popularized the concept of environmental music with his first few ambient albums. I listened to his music and a lot of other minimalist type of stuff when I was younger (Terry Riley, Ryuichi Sakamoto).

Thinking back, some of the old-school IDM artists like Aphex Twin, Squarepusher, and Boards of Canada also come to mind. Glitch music is what lead me to start hacking toys to make sounds, which lead me to start designing synthesizers, and now ultimately instruments and sculptures. 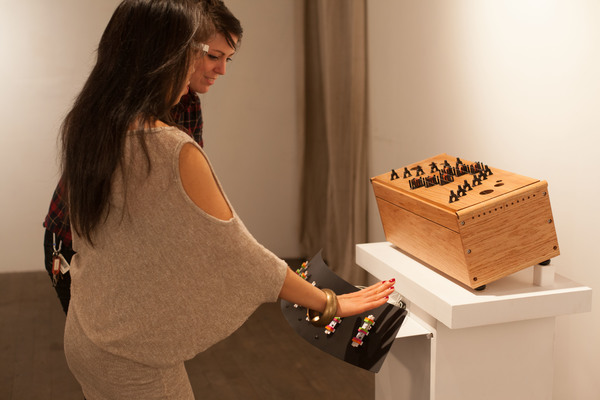 My dream bit is an Electromagnet Bit. Someday!